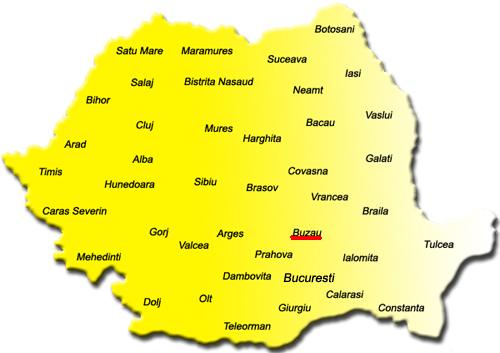 The city of Buzău is the county seat of Buzău County, Romania, in the historical region of Wallachia. It lies near the right bank of the Buzău River, between the south-eastern curvature of the Carpathian Mountains and the lowlands ofBărăgan Plain.

The city’s name dates back to 376 AD when the name appeared on a letter that spoke about the martyrdom of Sabbas the Goth. During the Middle Ages, Buzău was as an important Wallachian market town and Eastern Orthodox episcopal see. It faced a period of repeated destruction during the 17th and 18th century, nowadays symbolized on the city seal by the Phoenix bird. Those destructions are the main reason for which no building older than the 18th century exists in the city. After that, Buzău slowly recovered to become nowadays an important modern city in south-eastern Romania.

The city’s landmark building is the Communal Palace, located in the central Dacia Square. The Nicolae Bălcescu Boulevard links it to the Crâng park, Buzău’s main recreational area.

Buzău is a railway hub in south-estern Romania, where railways that link Bucharest to Moldavia and Transylvania to the Black Sea coast meet. DN2, a segment of European route E85 crosses the city. Buzău’s proximity to trade routes helped it develop its role as a commerce hub in older days, and as an industrial center during the 20th century. Most of the city’s industry was developed during Romania’s communist period, and was refactored through the 1990s to a capitalist economical framework.

The city’s most important landmark is the Communal Palace, built between 1899 and 1903, now serving as City Hall. Along with the Courthouse, the Communal Palace was designed by architects commissioned by mayor Nicu Constantinescu, at the end of the 19th century.

Crâng Park, carved in the corner of a larger forest, lies in the western outskirts of the town and is a remnant of the old Codrii Vlăsiei. Crâng was designed in the late 19th century. It has an obelisk, erected in 1976 to celebrate 1600 years since the town’s first recorded historical attestation.

The oldest building in Buzău is the Vergu-Mănăilă house, erected in the 17th or 18th century as a boyars‘mansion. Renovated between 1971–1974, it now hosts the local Museum of ethnography and folk art.

The church of Banului, erected in the 16th century as a monastery, underwent renovation several times. In 1884, it was repainted by a team of painters including Gheorghe Tattarescu and his uncle Nicolae Teodorescu.

An old tradition of the city is the Drăgaica fair, a midsummer fair traced back to traditional shepherd’s fairs in the Buzău mountains, that moved to Buzău sometimes before the 18th century.

Banu’s church, built in 1571 by the Andronic treasurer in the same style with the monasteries from the north part of Moldavia

The Winmarkt commercial center. During the communistic era it was called Dacia shop, the biggest shop in the city.

The Communal Palace built by Al. Savulescu architect’s plans between 1899-1903.

Now this is the City Hall headquarter

In front of the Palace, The Pietroasa Hotel, the most expensive from Buzau.

The Chesarie the bishop seminary

The main enter into the Bishopric

The restaurant from the Crang park

Crang park. Landscape with the bridge and the island.

Marghiloman’s garden. On the bridge.

An auxiliary building of the residence, now there is a complex for old people.

The steam of the city putted on the wall.

The entrance in Marghiloman’s garden from the Alexandru Marghiloman street