Mogoşoaia is a commune in the west of Ilfov County, Romania, composed of a single village, Mogoşoaia.

Mogoşoaia Palace is situated about 10 kilometres from Bucharest, Romania. It was built between 1698-1702 by Constantin Brâncoveanu in what is called the Romanian Renaissance style or Brâncovenesc style, a combination of Venetian and Ottoman elements. The palace bears the name of the widow of the Romanian boyar Mogoş, who owned the land it was built on. The Palace was to a large extent rebuilt in the 1920s by Marthe Bibesco.

The Palace had been given to Marthe by her husband, George Bibesco, who later also deeded the land to her. She spent all her wealth from the many books she wrote in its reconstruction and it became the meeting place for politicians and international high society, a quiet retreat during the growing turmoil of the 1930s. Prince George died in 1941 and was buried in the small, white 1688 church on the grounds of the Palace.

The Palace is now a popular tourist destination, but although the grounds and gardens are beautiful, the interior of the palace itself is under reconstruction and presently houses a museum and art gallery. (Muzeul de Artă Brâncovenească)

During the second world war, Prince Antoine Bibesco (a cousin of George Bibesco) and his wife Elizabeth Bibesco, refused to flee the country despite their outspoken anti-fascist opinions. Elizabeth spent considerable time during these years visiting Marthe Bibesco at Mogosoaia and when Elizabeth died of pneumonia on April 7, 1945 she was buried in the Bibesco family vault on the grounds of Mogoşoaia. It may surprise visitors to see her grave here with its poignant epitaph in English – „My soul has gained the freedom of the night.” Neither Elizabeth Bibesco’s husband, Antoine, nor George Bibesco’s wife, Marthe, could be buried beside them, as they both died during the Communist regime.

In 2008 the Romanian gothic rock band Inopia produced a video of their song „Epitaph”, filmed entirely at Mogosoaia. The long medievalist composition is based on Elizabeth Bibesco’s epitaph.

In 2010 the Balkan Go Championship took place at Mogosoaia, being broadcasted by EuroGoTV to hundreds of fans watching the stream and following the games on the KGS Go Server.

It was this type of spontan short trip. 🙂 We were planning to go home and we arrived at  almost 10 km of Bucharest. We went at the north station and firstlly I said to take any train in any direction, but after „family council” 🙂 we stand the verdict: destination Mogosoaia. The train ticket was pretty cheap, around 1.5 lei, 14 kilometres, time: almost half an our.

With smiles on our faces we went in the train. It was an old dirty personal train, we were hanged on the window making photos and films. It came the porter, a strange man that was kidding with everyone, I thought he was drunk :D. He told us that it’s not so easy to arrive by train at Brancoveanu’s castle, because it’s pretty far. And now the adventure it’s starting 🙂

At last we saw the writing on the table : MOGOSOAIA. It was almost free field beside the train station. We asked about the castle and we found out that we have to go by foot something like two kilometres. It was a dusted country road and, as a bonus, a hot autumn day. It was a little bit difficil to arrive because we didn’t know exactly the road and nobody was there. We found a house with a man that was drinking at the enter 🙂 He and his wife told us how to arrive and we recharged our water reserve. 🙂 After almost an hour of walk and ask people about the road, we finally arrived, of course being exhausted.

We enter the park, we passed after the fortificated walls, and here we are, in the front of the castle. It wasn’t as I was expecting… It’s a small and coquettish building with 18th century perfume :). The complex includes also a church and Martha Bibescu’s hot houses plus other buildings for guest.

After we explored carefully every corner, after we made a hundred photos, we went back searching a easier way to Bucharest. This time we choose a mini-bus. It was full of all types of people, but we had the big advantage to arrive fast, without dusted roads, hot sun and foot-walk. It was more expensive then the train was, we paid for one ticket 3.5 lei. It doesn’t matter, it matter that we were back exhausted and everything we wanted was a good sleep 🙂

You can find this building outside the Palace, just near to the entrance

The guide panel with the complex 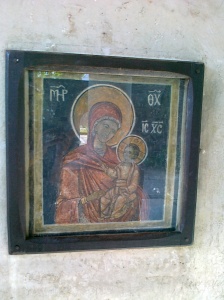 An old icon on the entrance wall of the St.George's Church

The painting from the upper part of the front verandah 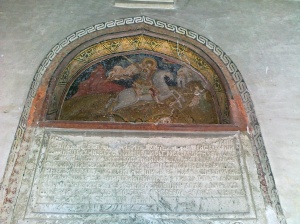 Saint George depicted as the patron of the church

The main entrance through the watch-tower (Gate House)

Saint George Church, erected by Constantine Brâncoveanu in 1688 which was decorated with frescoes in 1705 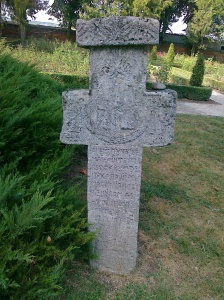 Cross with two-headed eagle symbol of the Cantacuzinos

The lake behind Palace

The Room of the Princely Council 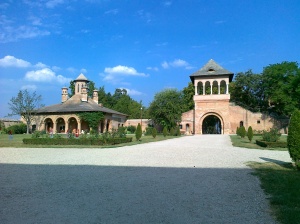 Cuhnia and the Gate House from the watch-tower

Watch-tower from The Court of Honor

Cuhnia - the former princely kitchen is now a place for exhibitions. It was built between 1681 and 1702. Its ventilation furnaces were restored in 1965 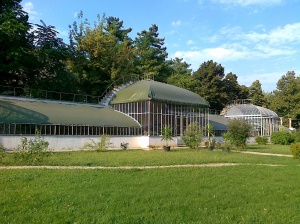 The N. Bibescu Hot Houses - a French studio - 1890. Currently, they are used for growing flowers and as an art studio for children. Restored in 2002

A Toyota jeep near the The Conference Center 🙂

The Palace - finished in September 1702 by Constantin Brancoveanu for his second son, Ştefan. Currently, the Palace is the host of the Aula Tradition Museum (Founded in 2000), namely the donation made by Liana and Dan Nasta, a compared art collection comprising approximately 300 items, its ground floor rooms and the annexes thus hosting annually approximately 10 temporary, thematic or contemporary art exhibitions.

The Stairs of Honour inside of Palace. The space is dedicated to Voivode Constantin Basarab Brancoveanu /Constantin Bessarab the Brancovan/ (1688-1714), the author of a synthesis, in a Romanian tradition spirit, of Eastern andWestern origin elements. The ruler is depicted in Varini Favorini's engraving, as Prince of the Holy (Western) Roman Empire and of theWallachians, and in that of Pietro Uberti's, made after the voivode and his four sons had been beheaded in Constantinople. The coats of arms of both the Basarabs /Bessarabs/ and Cantacuzinos /Cantacuzenes/, the Persian "shah-in-shah" carpet, decorated with royal symbols, complete the display.

The Room of Kilims. The kilims are hand-woven textiles used as wall hangings and floor or furniture coverings. These flat weaves are made in a very similar technique as the West-European tapestries - that is why they have often adorned Romanian Lands' palaces and manors. As for the kilims decorating small-town and country houses, they are woven by hostesses themselves. Martha Bibescu ordered that the two-room apartment having once belonged to Constantin Brancoveanu's wife be changed into what she called "The Throne Hall." It is here that the Wallachian (Oltenian included) and Moldavian kilims are displayed, each geographic area preserving its design and composition originality. Romanian kilims use for wool colouring vegetal dyes.

The Room of the Princely Chancellery. This place, dedicated to inner and foreign affairs, to recording and keeping important documents, statal transactions and concluded treaties, a seat for envoys and interpreters, houses maps, official papers (deeds) and chancellery insignia. The two gospels, the tryodion and the coats of arms with Christian symbols are placed in the vicinity of engravings showing the main actors of the Ottoman Porte at the beginning of the 18th century. A velvet table covering embroidered with voivode's monogram in Cyrillic letters and, on the right wall, the portrait of Constantin Brancoveanu's family, Nora Steriadi's textile version made after the votive picture at Hurezi Monastery, try to render the atmosphere. In Martha Bibescu's time, this ceremonial space was used as concert hall and housed formal parties and fastuous balls. 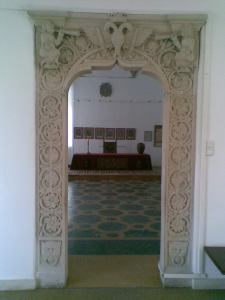 The entrance into The Room of the Princely Chancellery

Voivode's throne is replaced by an 1860 princely armchair taken from the church of Potlogi. Del Chiaro speaks about the three steps of the throne in his History of Wallachia. The back of the armchair, which is gilt-thread embroidered, shows the princely eagle framed by two laurel branches. Chair sovereignty is underlined by the scarlet hangings bearing country's Arms in a golded border.